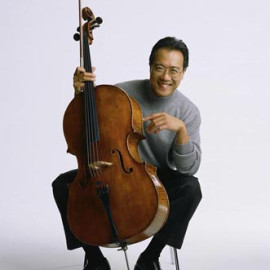 So…the Grammy Awards were last week: Perhaps you’re expecting us to write about Fun, and how they just won Song Of The Year for that great tune, “We Are Young”(Boston Party Machine played this song for a cake cutting at a recent wedding). Or about Beyonce’s win for Best Traditional R&B Performance (Lorenzee rocks “Love On Top,” too).  But…no…we’d like to take a moment to give homage to two of winners for the Best Folk Album (” The Goat Rodeo Sessions”).  Folk?  Say what?

You see, we’d like to send a shout out to the incomparable cellist, Yo-Yo Ma, as well as bassist, Edgar Meyers  (kudos, of course, to the two other musicians on the album, Stuart Duncan and Chris Thile).

Our band leader, Rob, has played with many great, Grammy winning musicians over the course of his musical career (see BPM website for the illustrious list), but one of the cutest stories he’s told me is about Yo-Yo Ma.  Rob and Yo-Yo were performing at a concert (Bach) at the Spoleto Festival in Charleston SC many moons ago.  They were goofing around just before a concert, swapping stories…and then their bows, which is not typically done (cello and bass bows are very different).  Of course, they switched back to the correct bows just before the conductor lifted of the baton, and gave a fabulous performance.  Rob has had the honor to play with Yo-Yo Ma many times since.

Edgar Meyers is known as one of the best contemporary bassists in the world.  Rob has played with him several times, with one memorable performance standing at the fore:  Edgar led a  classical polyphonic piece from the 16th century for seven solo bassists.  Rob was honored to be one of the bassists on the stage that night, which was televised by The Boston Pops. 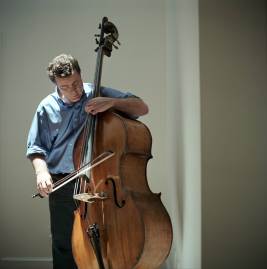 Many congratulations on your Grammy win, Yo-Yo and Edgar!